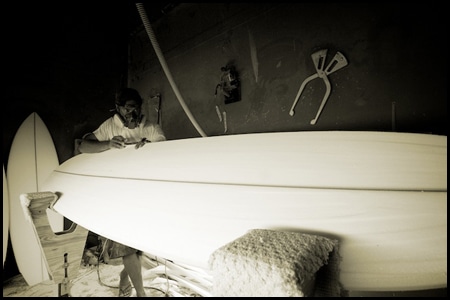 Ian Zamora was born in the Philippines where he spent his initial fourteen years far from the world of waves and surfboards. Much of that was to change when Ian’s parents decided to move him and his older sister to the United States in hopes of a more opportunistic life. Shortly after their transition, on a family vacation in Waikiki, Ian almost instantly discovered his love for the sport of surfing and the lifestyle it offers. He spent months and months honing his skill at local Northern Los Angeles surf breaks; however, when it came time to purchase a quality surfboard that would afford him proper progression, Ian became discouraged because his pockets were not capable of such an investment. Most people would fold under such an impediment; however, it only made Ian creatively seek out another option – to build surfboards himself!

Under the tutelage of world renowned shapers, San Diego’s Rich Pavel and Los Angeles’ Glen Kennedy, Ian’s talent and skill as a shaper has evolved over the years. He is quickly becoming recognized as one of this generation’s most well-rounded craftsman. In his relatively short time in the surf industry, Ian has proven to be a proficient and respectable surfer, shaper, and overall upstanding individual.